"It is of vital importance to swim against the current of bits and bytes which challenge our proven analogue way of reflecting on what is happening around us. I sincerely hope this anthology prompts the start of a critical conversation about the digitalization of working and organizing.", Stephan M. Schaefer writes in the preface. Schaefer is one of the editors of the new book “Working and Organizing in the Digital Age” published by the Pufendorf Institute for Advanced Studies at Lund University. This quote directs our attention to the essentials of the Digiwork research project, a critical review of one of the most distinctive signs of the time: digitalization. 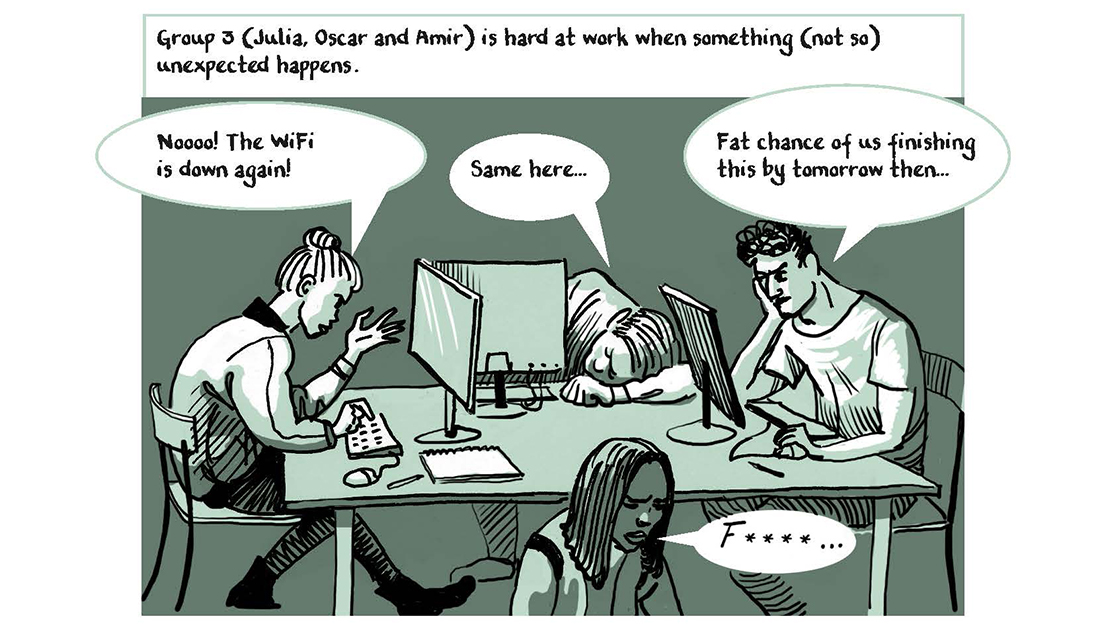 The internet in the school breaks down and the students can't work. The teacher has to send them home even if that means that she violates the rules, but she doesn't have any other options. Illustration: Maja Lindén.

Stephan M. Schaefer, Associate Senior Lecturer at LUSEM, released the edited volume just some weeks ago together with his colleagues Magnus Andersson, Elizabeth Bjarnason and Kristofer Hansson. The book summarizes an interdisciplinary research project funded by the Pufendorf Institute in Lund during 2016-2017 and explores the effect of digitalization on working and organizing.

"The idea here was never to produce some particular outcome or a research report. We really worked in the Pufendorf spirit which is to stimulate debate and to produce ideas," Stephan says. "To ask what is important or what could be important to do research on later, after the Pufendorf project. The book is more about summarizing ideas and scenarios and to draw attention to the negative and positive effects of the technology. To see how much unintended consequences it might have."

During their project the authors, who are from various disciplines, discussed technological, social, political and organizational aspects of digitalization They also invited colleagues from other disciplines, for example a brain researcher who discussed how the brain might be influenced by digitalisation or a robotics researcher from LTH who talked about artificial intelligence and robots. During the last stages of the project the team hosted an international guest: Melissa Gregg, a former professor of gender studies and author now working in Silicon Valley at Intel Corporation. Shebrought a combination of both social science and practical application into the project. The project also cooperated with an illustrator - Maja Lindén – who in collaboration with the research team produced images which depicted scenarios of digital technologies  in use:

"We carried out some research for example on hospitals, social media, home caring services and real estate agencies to get a picture of how digitalization was used and how it affected the organisations. We collected impressions and described a situation that could occur and discussed it with our comic artist and then she illustrated the particular situation."

Can we keep up with the pace?

The pace of technological progress is fast. Can we keep up with it and are we prepared to use it in the right way?

"Even if it is talked about a lot, digitalization is still not that pronounced within many organisations," Stephan says. "Of course, in some industries it is quite dominant but overall I feel that it is often more talked about than actually practiced. Take my own organisation, Lund University. The digitalization and the technological development still hasn’t come far at all, we still don't use digital exams at my faculty for example. And that is ok, sometimes the analogue way of doing things has proven to be very efficient as well.“

A gift or a burden?

However, there are ongoing efforts to digitalize universities and schools. For example the use of e-books is increasing in Swedish schools and a lot of the school work is stored in clouds and servers. This can have unintended consequences. One of the chapters in the book by Carola Aili and Lars-Erik Nilsson concerns the digitalized school. The internet in the school breaks down and the pupils cannot carry out their assigned work. The teacher must send the pupils home even if that means that she violates the rules. Yet she does not have any other option.

Another chapter in the book by Calle Rosengren discusses home care service (“hemtjänst”) and their use of a technology called “Mobipen”. Mobipen is a scanning technology that documents and records work and visits at the care provider. The data is transmitted and stored digitally. It not only, however, transmits data but the Mobipen is also used to split work tasks into different assignments and time requirements which need to be registered by the home care service worker. If a patient wants to talk and it is not a part of the assigned schedule and time requirements it is not supposed to be done as it cannot be registered with the pen.

"We moved on from old fashioned management models such as Taylorism to greater freedom and care for workers but then digitalized technology might lead us back to old routines which means we can control work processes down to the minute," Stephan says. "We can't think that digitalization is the solution to everything, we have to evaluate it by looking at the social, cultural and individual consequences. We can definitely see that occupations requiring care for people can't be replaced by technology or at least, they are very hard to replace. Many aspects of this kind of work can hardly be digitalized."

The impact of social media

"I would say that this is the essence of the project. We can't think too much in extremes – digitalization will save us all or it is an evil that needs to be erased - but stimulate constructive debate and produce ideas about what works and what we need to view with caution. The discussion must go on." Stephan concludes.

In his further research projects Stephan will extend and develop his study of social media at work with some of his colleagues from the Pufendorf project.

This article in Swedish

Working and Organizing in the Digital Age (2018)

The Pufendorf Institute in Lund 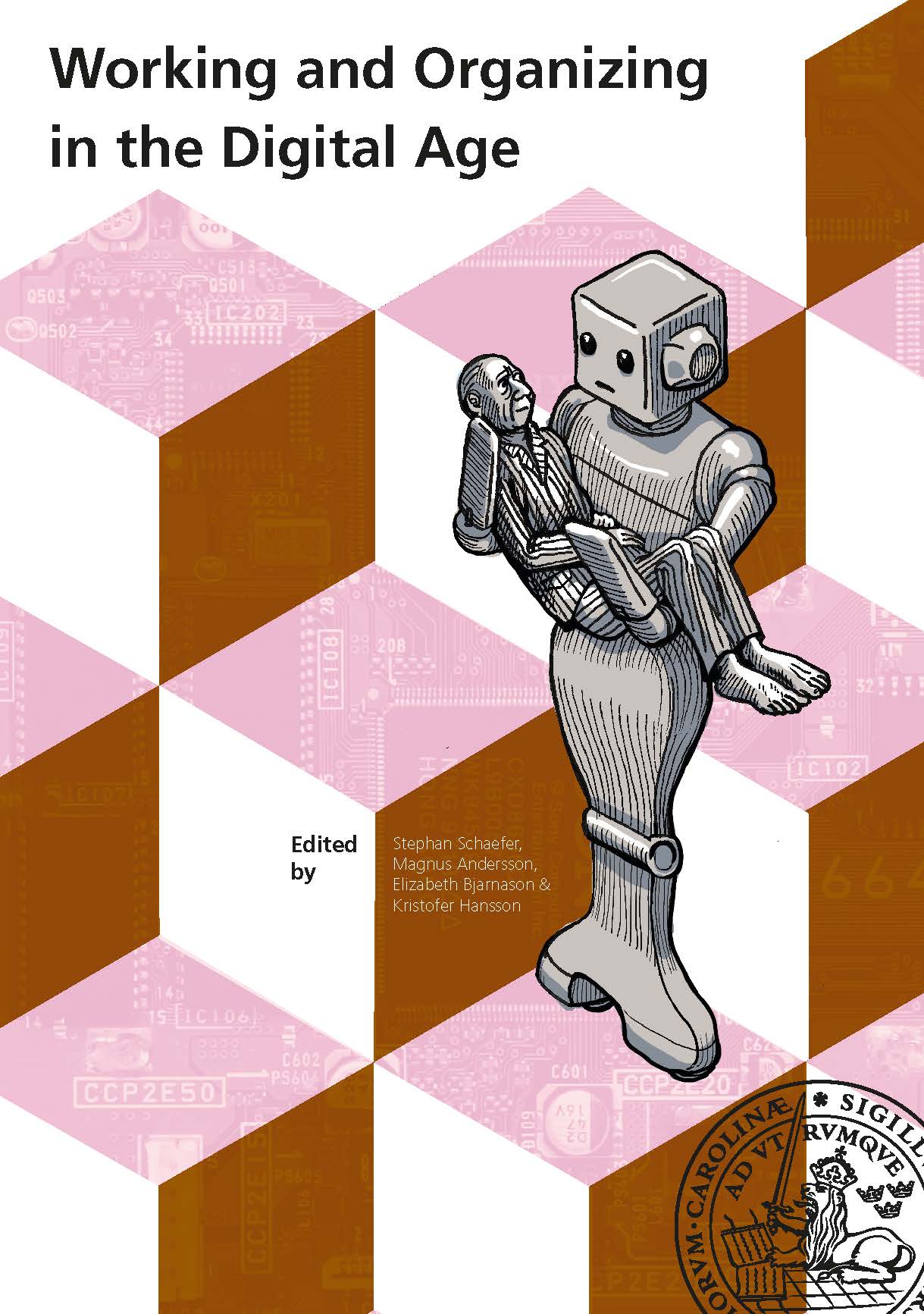