How does the representation of women on Swedish corporate boards affect the financial performance of the companies? This is investigated in a degree project by former students in financial management, who now have received a student essay award from Finansförbundet. 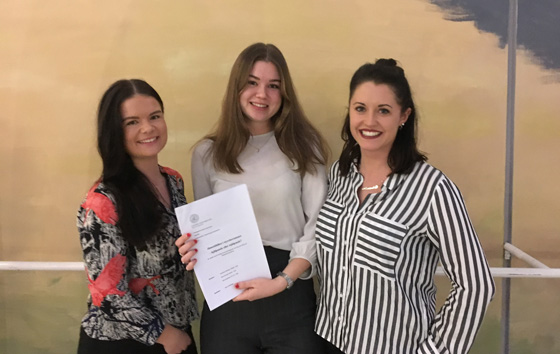 Julia Gustavsson, Ellen Erstrand and Alexandra Stenberg, all former students of the BSc in Business and Economics and the bachelor course in financial management, felt a lack of explanation of why the Swedish business sector has not yet achieved gender equality.

”We were aware that Sweden is not a gender equal country in this area, but we lacked a theoretical explanation of the situation. We wanted to see if it was possible to find evidence, from a financial perspective, that unequal boards in listed companies perform better in the stock market. Our previous experience was that the subject has been discussed more frequently with focus on social aspects and instead we wanted to focus on theory and use that as our starting point in the discussion.”

The three authors of the essay, whose tutor was Maria Gårdängen, are now awarded the scholarship for best essay of the autumn semester 2017 by Finansförbundet, Sweden’s largest trade union for financial employees. The jury finds that the essay is ”a well-conducted quantitative study, based on input from many companies, and carefully analyzed. Furthermore, the jury finds that it's a technically thorough study but at the same time easy to absorb; even in its most methodological parts.”

The results of the essay show a negative correlation between the number of women in corporate boards and the financial performance of the companies, a result that surprised both the jury and the authors. The jury is impressed by the theoretical reasoning presented on why the result was negative and how it may be experienced to be a woman in the minority in senior positions. The study also points out that female board members often appear to be appointed in more risk-exposed companies, which have generally underperformed on the Swedish market for a long time. The reasoning in the study concerns the everyday life of many women in leading positions in the finance industry, where the culture still reflects the dominant group, the jury points out in its motivation for the award.

Julia Gustavsson, Ellen Erstrand and Alexandra Stenberg argue that their great interest in the subject has facilitated the work with the essay and contributed to a more in-depth analysis.

”We are very proud to have received the scholarship from Finansförbundet. It feels great that they pay attention to our work and highlight the topic of female representation in Swedish corporate boards. We want the situation to be highlighted and noted until gender no longer affects the outcome of financial performance.”

About the essay and the bachelor course in financial managem

More about the bachelor course in financial management

More about the scholarship of Finansförbundet