From pupil Greta Thunberg’s call for action regarding climate change, to students and educators from Lund University raising questions about the sustainability in our food choices and travels – the voices are many concerning the future for our planet. Ester Barinaga is professor in social entrepreneurship and wishes that teachers and entrepreneurs might see – and teach – alternatives to the current economic system. 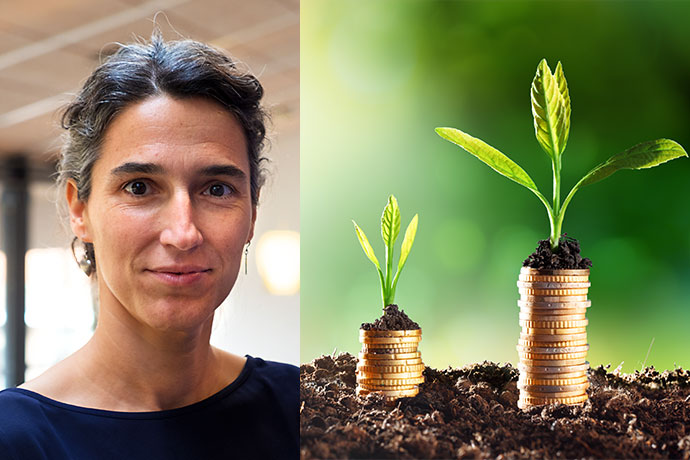 You argue that the “rules of the game” concerning the market system should change. Why?
“Capitalism has brought us progress and raised the overall standards of living. Yet, in its current form, it has also led to increased inequality, environmental degradation and political polarization. Because of this, the rules of the game are today very much under question. Are these rules leading to a sustainable future?”

What are these rules?
“Economist William Baumol’s ‘rules of the game’ refer to the system of rewards characteristic of the market system that channel entrepreneurial behaviour toward profit-seeking initiatives. Today’s market-based system of rewards consists of three main rules: the free market, private property and the profit motive. These rules correspond and build on each other.”

“I find economic historian Karl Polanyi’s 1944 book The Great Transformation still highly relevant. He analyses the change from small, relatively independent, village markets to what he calls a “market society” that ushered with the industrial revolution. In a market society, the market is not only used to organize the production and distribution of goods and services, but also the distribution of land and labour. Nature was enclosed so it could be bought and sold as land; humans were commodified and their time bought and sold in the labour market.”

Why do you believe that these capitalist market rules need to change?
“Today, the educated class, as well as the working class, has no hope, in some countries more than others, for any permanence of work or lasting contracts. This is the first time in history, that the new generation doesn’t improve their living conditions compared to their parents.”

“Economists like Paul Krugman, Joseph Stiglitz or Thomas Piketty, are telling us how increased inequalities actually lead to a collapse of the system itself. The market ideology has served us well in certain areas, but it has gone beyond what was created for. We praise equality, but this system is not leading us there. The social and caring part of society is left out. That is why I think it has to change.”

Do you think that the system has to break before we can imagine another one?
“I hope not. Instead, I hope it will start with small changes. Consumption of meat in Sweden is, for instance, going down for the first time, and more and more people are consuming ecological products. Hopefully gradual individual and collective changes will slowly transform the economy into a sustainable, fair and humane one.”

How to rethink the rules of the game?
“I think that we as educators contribute to reproducing the current rules of the game, but that we, by asking ourselves “what can we do”, can try to find our role and be part of catalysing the counter-movement. We do have an entrepreneurial capacity in our society, but how do we channel it into endeavours that build on other economic principles? We need to see ourselves as active participants reproducing – or contributing to change – the system.”

“There are other ways of organising a business than those based on the profit-motive and private property. Think for instance of co-operatives. But most often we don’t teach about that. Today many students dream of creating a better world by becoming social entrepreneurs. Social entrepreneurship wasn’t even a topic when I studied business in the nineties.”

You describe your own research as “interventionist” and that you actively take part in entrepreneurial processes you write about. What do you mean by that?
“In 2010 I started the social venture Förorten i centrum, where we used the collective production of murals as a method to work with communities in the stigmatised suburbs of Sweden’s cities. Then I wrote about the process of mobilising the community and organising for social change. It is interventionist in the sense that I start up something together with the communities, you can call it action research. The idea is that we have to bring the University closer to the world that we study. If we want the world to change, we need to learn together with people from outside the university.”

One current example of this co-operation is your project in Kenya, with focus on alternative currencies. How does that work?
“Local currencies are a phenomenon that arises when there are financial recessions or crisis. They thrived across Europe in the thirties and also after the 2008 crisis. Yet not many have heard about them. One of the currencies created in Switzerland in 1934, the WIR, still exists today. Some economists argue that one of the reasons to the stability of the Swiss economy is that they have another currency to use when their main currency is scarce.”

“Right now, I’m involved in a research project in Kenya, where we’ll be studying some of the community currencies that they already have in Mombasa and Nairobi. We’ll study what worked and what didn’t, what governance structures strengthen the community and their democratic processes. We will then introduce three new community currencies in Kisumu. We hope to create local networks of knowledge, empower and make them independent of us.”

What can you do and what can I do?
“Be reflexive in your everyday activities, be aware of the choices you make. Nobody can change the world alone, but everyone can do something. This fall I’ll be teaching a course, Re-imagining capitalism. We’ll look at experiments with new ways of organising the economy. It’s everything from basic income, community currencies and cooperative systems to social impact bonds and microfinance.”

“We may have to organise the economy and society on a variety of principles, the market being one among others. I believe we need to use several collective tools to shape a sustainable future, from policies and regulations to civil society initiatives.”

“As a University, we reach out to many students every year, and they will hopefully be influencing groups of other people in their lives. We can help shape these students into prioritising the environment and social sustainability. As researchers, we should try to research things that we believe may really work, something that challenges our imagination and the way we organise things, so that we can see if this can be the seed of something new.”

Ester was appointed professor at LUSEM in 2019. In 2013, she became Professor at the Copenhagen Business School (CBS).

From 1998 to 2002, Barinaga conducted her Ph.D. studies in Business Administration at the Stockholm School of Economics (HHS), Sweden.

She received a Master in Business Administration (MBA) in 1995 and a Master’s Degree in International Management from ESADE Business School in Barcelona, Spain, in 1996.

The topic: Entrepreneurship and sustainability

Professor Ester Barinaga held the keynote Entrepreneurship and sustainability – do we do the right things as educators? at the European Entrepreneurship Education Workshop 2019 in Lund 28–29 March 2019.

The interview with Ester is based on the thoughts she expressed during the said keynote lecture.

The keynote as a PDF

Theme: Speaking of our age

What thought patterns can be found in Sweden today? What invisible ideas govern our thoughts? Meet some of the University's researchers who give their perspectives on the present. Next up is Ester Barinaga, new professor in Social Entrepreneurship at Lund University.

This article was first published in the Lund University Magazine, LUM.