We know very little about the ways in which large research facilities like the ESS and MAX IV interact with surrounding society. And it cannot be assumed that they function just like companies, universities, or other large organizations, says Olof Hallonsten, researcher at the Lund University School of Economics and Management. He is the coordinator of the Thematic Collaboration Initiative BISS—Big Science and Society. 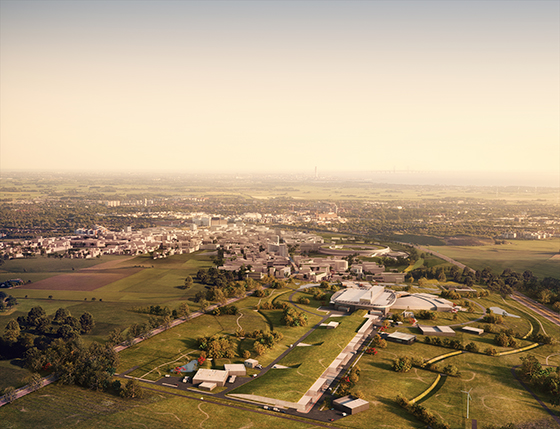 ESS – European Spallation Source – is currently being built at Brunnshög on the outskirts of Lund. Lund University School of Economics and Management researcher Olof Hallonsten wants to see more social science done on this kind of research facilities.

“I used to walk past the old research facility MAX-lab on my way to work every day and I started to wonder what they really were doing in there. At that time, I was a PhD student in research policy. One day, I simply knocked the door and asked them. The director gave me a keycard, and I could come and go as I liked,” says Olof Hallonsten.

The work resulted in the dissertation Small science on big machines: Politics and practices of synchrotron radiation laboratories.

“What I noticed was that there was hardly any research done earlier on how advanced research facilities like MAX-lab, MAX IV and ESS are organized and how they interface with society. On the other hand, there were many misunderstandings on what these labs do. And we still know very little about the interaction between these major facilities and the rest of the world of research, the economy and society at large.”

Olof Hallonsten makes a somewhat unexpected comparison between the large research facilities with their advanced instruments—and a university library.

“They are both resources. ESS—European Spallation Source—will not produce Nobel Prize research all by itself. It needs people, people with knowledge on how to use the resource. When the day comes that research at ESS leads to a Nobel Prize, it is most likely to be done by a researcher from for example Stanford, Oxford or Singapore—who travelled to ESS, did experiments, went home, published at home, and maybe not even mention that they were ever in Lund. That is how large parts of science today operates.”

Critical voices are not negative

“It would be irresponsible by us at Lund University to not try and benefit from having the ESS built more or less in our backyard. Within the disciplines that can directly use ESS, it is obvious that one has to mobilize to reap maximum benefit, but also the social sciences should take the opportunity. We can gain access to exciting cases and new empirical material as well as make contributions, as social scientists should: How can we assist in making the ESS harmonize with surrounding society?

Olof Hallonsten has occasionally been seen as an adversary to the ESS. He strongly objects to that image, but realizes that it probably has to do with the discourse around the ESS some ten years ago, when the large research facility was in a marketing phase and the campaign to locate it to Lund was still ongoing.

“I say: Do not interpret critical as negative. I’m not against the ESS. I have taken my role as a social scientist seriously, and scrutinized the details of what appeared as too good to be true. I have only done perfectly adequate analyses and opposed an overly rose-colored image.”

The unexplored areas are many.

“Today, the social sciences and my field, organizational sociology, are very focused on the private sector and public administration. Some attention has been directed at universities and their particular organizational conditions and structures. But large research facilities are managed and organized differently to all of these ordinary organizations in society. What role do they have in the research system? How do you control access to the instruments, and how do you get the best results? And how should you organize and govern from a political level?”

“There is a clear knowledge deficit here. They discuss the business case for ESS, growth factors, Öresund integration ... and tend to forget that the ESS most of all is a huge instrument for science, and hence with a multifaceted and very unpredictable future.”

The BISS collaborative initiative will help to meet concrete challenges in the harmonization of ESS with society, as well as produce ideas for new research projects. Among the collaborative partners are the Swedish Tax Agency, the Swedish Migration Authority, the National Archives and various companies in the region.

“We will have a number of thematic seminar activities, allowing researchers and practitioners to meet and discuss a number of issues. Collaboration in its correct sense.”

Other scholars in the project are Axel Hilling at the Lund University School of Economics and Management, focusing on tax issues, Ulf Maunsbach at the Faculty of Law, historian of ideas Thomas Kaiserfeld, and the gender studies-researchers Kerstin Sandell and Katherine Harrison.

“This November we will organize an initial event, discussing the industrial use of ESS and MAX IV. Using the tools requires such skills and high level of expertise that an entire new industry is emerging: the mediator companies. We will look into this because the issue needs to be raised.”

But the collaboration initiative BISS is just the beginning, hopes Olof Hallonsten.

“We are also launching a research network that involves the same four faculties, where we also invite more researchers and groups to come up with ideas for new collaborations and projects on how to study the ESS and MAX IV within the social sciences and humanities. In the long run, we should also plan to take part in education—I’m quite sure that the students too are wondering what it is that they are building out there at Brunnshög?”

The university collaboration initiative BISS, Big Science and Society, has just been launched. Its coordinator is Olof Hallonsten and it involves contributors from three faculties in addition: Faculty of Social Science, Faculty of Law and Faculties of Humanities and Theology. Olof Hallonsten is doctor of Research Policy, working as researcher at Lund University School of Economics and Management. His academic studies started with mathematics and physics, but very soon he started to focus on the politics and organization of research infrastructures and the relationships between contemporary large-scale facilities and society.

More on Olof Hallonsten and his research